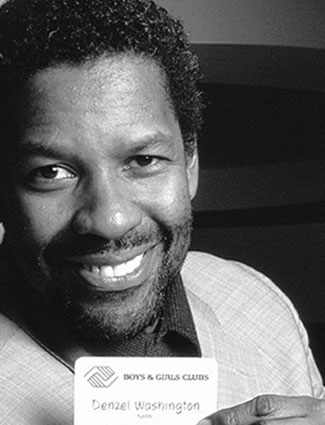 A casting call to find a national spokesperson for Boys & Girls Clubs of America? Not necessary. Denzel Washington is made for the part. The Academy-Award winning star of blockbuster films such as Training Day, Philadelphia, Malcolm X and Crimson Tide, and director of Antwone Fisher, grew up in the Boys & Girls Club of Mount Vernon. While several childhood friends ended up in prison, Washington chose a different path, and he credits the Club as being a steadying influence during tough times. Washington’s support is rooted in powerful, personal experience. “When it comes to Boys & Girls Clubs,” he says, “I know what I’m talking about.”

"Everything you’ve seen or heard about me began with lessons I learned to live by at the Club."