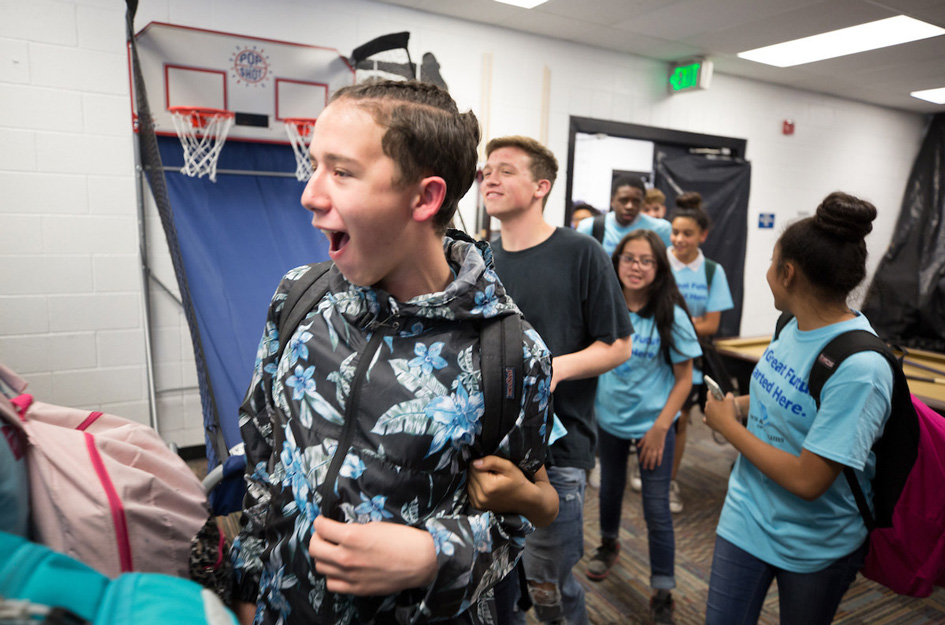 Creating opportunities for teens to participate in a variety of developmental activities in education, career preparation and civic engagement.

A special event was held on September 20 at the Lied Boys & Girls Club in Salt Lake City, Utah, to announce the renewed partnership and Aaron's continued support of the Keystone Club program. The Lied Boys & Girls Club received a makeover of its Teen Center valued at $25,000, marking the 30th Teen Center renewal to be completed since Aaron's announced the initial partnership in August 2014.

"We knew when we began our partnership in 2014 with Boys & Girls Clubs of America Keystone Club, and believe even more strongly today, that this program is a vital resource for thousands of youths in communities across America," said John Robinson, Chief Executive Officer of Aaron's, Inc. "We've seen the positive and life-changing effects of our partnership with Boys & Girls Clubs over the last four years and we're committed to supporting this incredible organization that not only provides a safe place for teens after school, but also helps in shaping our leaders of tomorrow."

The renewed partnership will build upon the successes the two organizations have achieved since launching the partnership. Aaron's has sponsored the last four national Keystone Conferences, where thousands of teen leaders from across the world gather and discuss important issues in their lives and communities. The 2018 conference was held in June, where more than 2,000 teens convened in Atlanta and participated in workshops, exchanged ideas, led service projects and socialized with peers.

Over the past four years, Aaron's also performed makeovers at Teen Centers in cities such as Atlanta, Buffalo, Chicago, Los Angeles, Miami, Nashville and San Antonio. Last week's makeover at the Lied Boys & Girls Club Keystone Teen Center in Salt Lake City was made possible by Aaron's in-kind donation of furniture, electronics and appliances – and the hard work of the company's employees.

"The Keystone Club makeover in Salt Lake City last week and the last 29 Keystone Club makeovers across the country over the past four years of our partnership is a testimony to the tremendous efforts by Aaron's toward making a lasting impact on the communities Boys & Girls Clubs of America serves," said Jim Clark, President and Chief Executive Officer of Boys & Girls Clubs of America. "We are excited to continue to work with Aaron's for another three years of partnership to benefit the youth of our country. Now more than ever, our youth need a safe place outside of their schools and homes where they can learn and truly make a difference in their local neighborhoods. With the help of great partners like Aaron's, we are dedicated to building a greater future for generations to come."

America's teens are in crisis. One in five students will not graduate from high school, costing the nation $159 billion over their lifetimes. Through Keystone and other BGCA programs, Aaron's is helping teens own their future by taking ownership of their lives to achieve their maximum potential. Aaron's hopes to inspire teens to "Own Their Future" through three principles:

Keystone Club is a BGCA program available to members ages 14-18 at Clubs nationwide and BGCA-affiliated youth centers on U.S. military installations here and abroad. The program creates opportunities for teens to participate in a variety of developmental activities in education, career preparation and civic engagement. The program is an essential element of BGCA's strategy to engage and develop teens into productive citizens and leaders.

About Aaron's, Inc.
Headquartered in Atlanta, Aaron's, Inc. (NYSE: AAN), is a leading omnichannel provider of lease-purchase solutions.  Progressive Leasing, a virtual lease-to-own company, provides lease-purchase solutions through more than 20,000 retail locations in 46 states.  In addition, the Aaron's Business engages in the sales and lease ownership and specialty retailing of furniture, consumer electronics, home appliances and accessories through its 1,709 Company-operated and franchised stores in 47 states and Canada, as well as its e-commerce platform, Aarons.com. Dent-A-Med, Inc., d/b/a the HELPcard®, provides a variety of second-look credit products that are originated through federally insured banks.  For more information, visit investor.aarons.com, Aarons.com, ProgLeasing.com, and HELPcard.com.