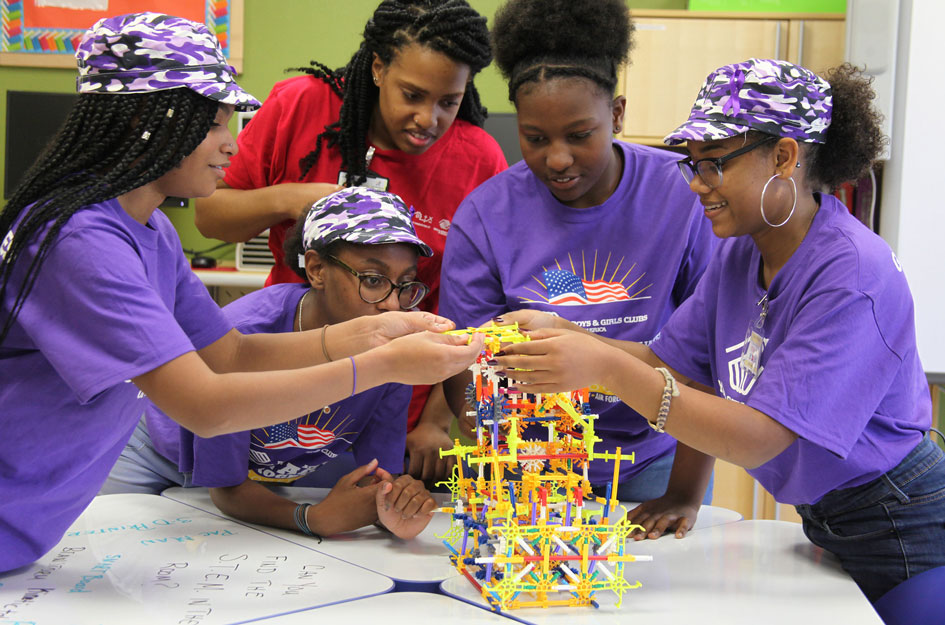 WALTHAM, Mass., May 20, 2019 – The John F. Kennedy Library Foundation, in partnership with Raytheon (NYSE: RTN), is inspiring the next generation of moonshot thinkers with a nationwide, space-themed STEM challenge designed specifically for Boys & Girls Clubs. The JFK Space Labs Explorers Challenge presented by Raytheon complements Boys & Girls Clubs’ summer STEM programming by engaging members and staff in a variety of biology and Earth science experiments like those performed on the International Space Station (ISS).

Raytheon has supported Boys & Girls Clubs of America since 2014 through a $5 million, multiyear commitment to evolve its national STEM programming, including building a network of STEM Centers of Innovation at Clubs that serve a high concentration of military youth. With Raytheon’s support, Boys & Girls Clubs of America has committed to establishing dedicated STEM learning spaces in all of its Clubs, including training 54,000 youth development professionals to implement a research-based STEM curriculum.

Through the JFK Space Lab Explorers Challenge presented by Raytheon, Boys & Girls Clubs across America are invited to perform hands-on activities selected by the ISS U.S. National Laboratory by July 20, the 50th anniversary of the Apollo 11 mission and first moon landing. Participating Boys & Girls Clubs have the opportunity to win prizes that expand their exploration of space, including through augmented reality experiences. Prize winners will be announced at the ISS Research & Development Conference in Atlanta, Georgia, on July 29.

“The JFK Space Lab Explorers Challenge presented by Raytheon highlights our longtime shared commitment to use STEM subjects to inspire young people to explore their futures and become the leaders of tomorrow,” said Jim Clark, President and CEO of Boys & Girls Clubs of America. “This challenge not only builds on the meaningful progress we’ve made with Raytheon’s support over the last five years, but it aligns perfectly with our existing summer programming, which is designed to maintain members’ interest and proficiency in STEM subjects at the time of year when they are most at risk of falling behind.”

Clubs participating in the challenge must perform one or more of the following activities by July 20:


Boys & Girls Clubs can register for the challenge on the John F. Kennedy Library Foundation’s website.

The JFK Space Lab Explorers Challenge presented by Raytheon shares its theme with two related programs announced by Raytheon and the John F. Kennedy Library Foundation in April: JFK Space Lab Explorers presented by Raytheon, which gives schools and afterschool programs access to a curated set of free experiments through ISS National Lab partners; and JFK Space Lab presented by Raytheon, a program for middle and high school students that provides selected schools named after President Kennedy with support for Earth science, biology and computer science experiments that utilize direct connections with—and data from—the ISS. All three programs were developed in cooperation with the ISS National Lab and made possible by Raytheon’s $1.5 million sponsorship of the John F. Kennedy Library Foundation to commemorate the 50th anniversary of the Apollo 11 moon landing and the technological leadership of the nation’s first moonshot.

Raytheon’s leadership in space-related capabilities originates in the Apollo era. Visit here to learn more about how Raytheon technology led Apollo 11 astronauts to the moon, as well as the moonshot innovations its employees are working on today.

About Raytheon
Raytheon Company, with 2018 sales of $27 billion and 67,000 employees, is a technology and innovation leader specializing in defense, civil government and cybersecurity solutions. With a history of innovation spanning 97 years, Raytheon provides state-of-the-art electronics, mission systems integration, C5ITM products and services, sensing, effects, and mission support for customers in more than 80 countries. Raytheon is headquartered in Waltham, Mass. Follow us on Twitter.

Visit www.jfklibrary.org for the latest announcements and calendar of events.