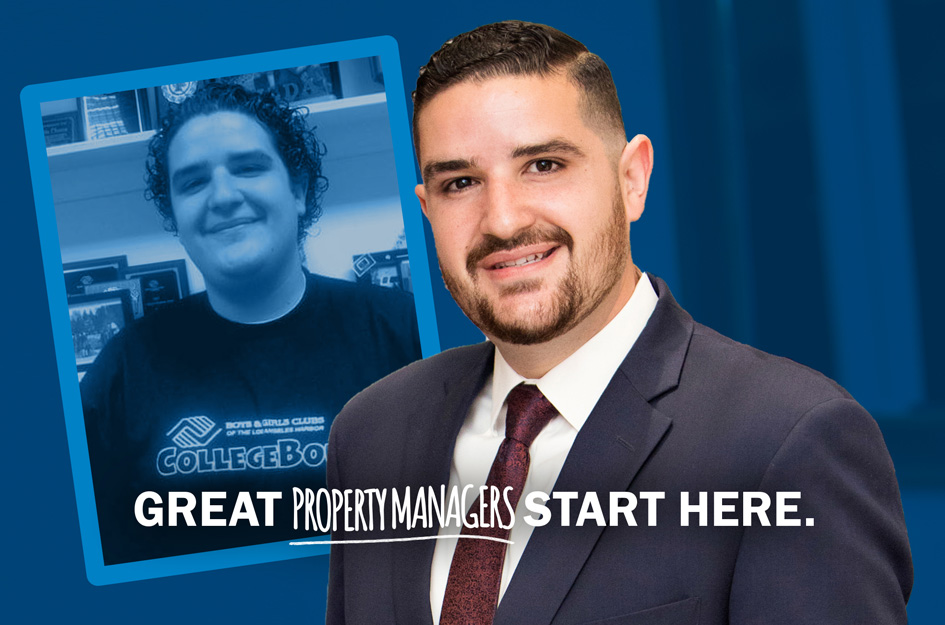 It would be nearly impossible for me to imagine my life without the Boys & Girls Club. I first walked through the doors of the Boys & Girls Club of San Pedro in Los Angeles at 7 years old, and I've been involved ever since. As a partner at a successful property management company, I have the Club and the people I met throughout my journey to thank for where I am today.

I lived at the Club as a kid — every day after school and every summer. My group of friends was the one always being forced to leave at the end of the night and told: "It's time to go guys, come on really, we're closed." We loved it there.

It was understandable. Growing up in a home without many positive role models, with an absent father and a mother who was trying to raise three young kids on her own, the Club was the place that kept me safe from gang violence in my neighborhood.

Because all the men in my life had gone to prison, I grew up thinking that was the norm. I knew I was a good kid, but I thought I'd end up in jail at some point because so many men in my life had. The Club helped me realize that wasn't the case and showed me the opportunities and potential out there.

One experience as a teenager especially opened my eyes to what was possible for my life. My best friend at the time (still my best friend today) and I had the chance to attend the Club's National Keystone Leadership Conference for teens. It was the first time I flew on an airplane. We went to Minneapolis and stayed in a beautiful hotel room. We'd never been anywhere like it. It helped us realize there was more to life. We got to see another world, network with people and visit a new place. It was a life-changing opportunity — a moment to escape the chaos of our teenage experience and dream about all we could achieve in our lives.

If it weren't for the Club and programs like the leadership focused Keystone Club and College Bound, I wouldn't have graduated high school on time or gone to college. Even during elementary and middle school, Club staff made sure we had safe transportation to and from the Club (important in our neighborhood) and that we did our homework every day to stay on track.

Mentorship was a big part of Club life for me, shaping who I was, modeling positive values and morals, and helping me become a productive adult. Not having a father in my life, mentors at the Club filled a void for me. Other programs at the Club helped introduce me to what it meant to be a man and a positive leader. Much of my moral compass comes from what I learned at the Club. The Club taught me to have a voice and own it — to share my opinion and stand up for what's right while also understanding both sides of a situation.

In my professional role as a manager today, I draw on leadership skills I learned at the Club, such as being service-minded, thinking critically and working with resilience. During tough times in college and even as an adult, I've still called on my Club mentors for support. It's a lifelong network.

My Club mentor, who I keep in contact with today, also happens to be my business partner! When I was in high school, he volunteered at the Club as a mentor and gave us so much just by lending his time. I don't think people realize how much giving one hour of their week as a volunteer can make such a significant impact in kids' lives at the Club. This mentorship sparked a love for business that led me to where I am today.

After graduating high school, I attended college in Northern California. Because the Club made such an impact on my life, I wanted to be a Club director. I returned to the Boys & Girls Club of Los Angeles, where I held several positions — and eventually met my wife, who was also on staff.
I later became interested in property management as a way to improve neighborhoods and eliminate blight in my community. Until this point, I never knew the specifics of my Club mentor's career, just that he owned his own business. He told me he was looking for a junior partner to learn the property management business and eventually own it.
Four years later, I'm a partner in the business. I'm 31 years old, happily married, and my wife and I just bought our first home. We both have successful careers. Going back to the Boys & Girls Club's goal of creating caring, productive, responsible leaders, I feel like that's who I am today, and it was only possible because of the Club.

Great Futures Start with You

One of the most powerful ways to give back is to serve as a mentor to Club kids. You can help open doors for other kids like Anthony in your community. Learn more about local mentoring and volunteer opportunities by finding a Club near you.

Did you know that 1 in 16 people living in America has been a member of a Boys & Girls Club like Anthony? If you've ever been a Club kid, join our free alumni community to connect to ongoing opportunities, events and each other. Learn more and become part of the Club after the Club.