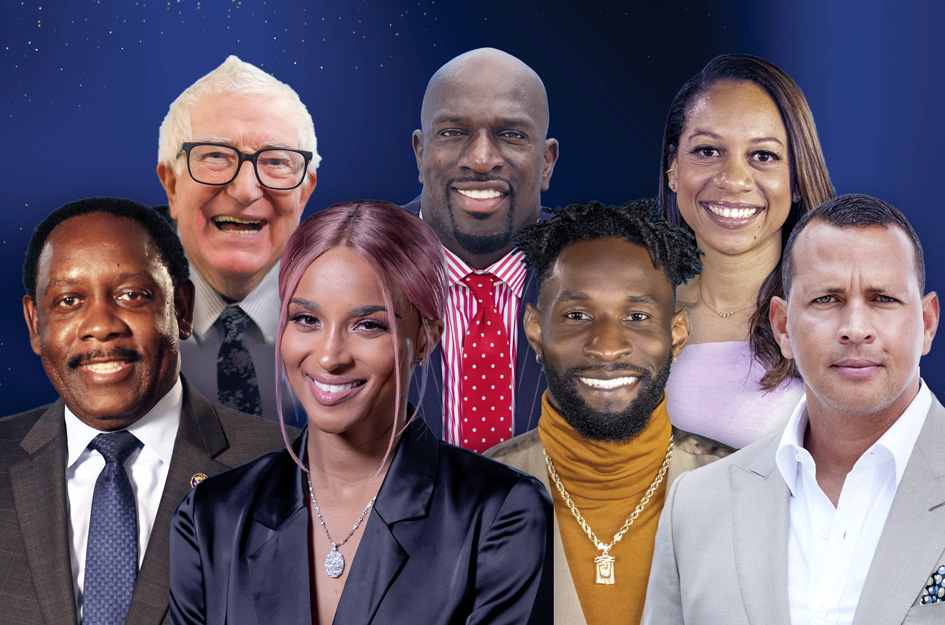 ATLANTA – (May 5, 2021) – Boys & Girls Clubs of America will induct seven new Club alumni into their Alumni Hall of Fame tonight during the youth advocacy organization’s virtual 115th Annual Conference. The ceremony will honor seven Boys & Girls Club Alumni, who have made major contributions in their fields, including sports, government, and music.

The honorees have forged unique, successful paths as adults, but a shared Boys & Girls Club foundation of education, support and community brought to them through invaluable programs, attentive staff, and the connections made with other Club youth.

Boys & Girls Club celebrates the achievements of alumni each year with the annual induction ceremony.

“We are proud to recognize another group of outstanding Club alumni for this 2021 class. Each one provides true inspiration for our Boys & Girls Club youth, making it clear that they can accomplish their dreams,” said Jim Clark, president and CEO of Boys & Girls Clubs of America. “With shared beginnings at Boys & Girls Club, inductees exemplify what we aim to accomplish for our youth. Given community and encouragement to grow, and opportunities to succeed, they can go on to make their mark in the world.”

The Boys & Girls Club Alumni & Friends estimates there are more than 16 million living Club alumni today, with each individual being an important piece of our story and mission. More information on this year’s inductees:

Tara August
Boys & Girls Club of Greater San Diego
Tara August was 8 when she started going to the Club. She was struck by how many women worked there. Women coached them, taught them skills, urged teamwork, helped with homework. Seeing women lead the Club on a regular basis was life-changing for Tara. Today, she is Vice President of Turner Sports Talent Relations and Special Projects. In a male-dominated field, she has risen through the ranks to managing some of the biggest names in sports, including Charles Barkley, Shaquille O’Neal and Pedro Martinez. Tara facilitates on-air production, sales, marketing and promotional activities, serving as primary liaison to all sport teams, leagues, agents, and celebrities to facilitate contract negotiations and guest bookings. Tara August is also a Southeast Trustee for Boys & Girls Club of America.

Ciara
Boys & Girls Clubs of Metro Atlanta
Ciara Princess Harris was born in Killeen, Texas. As the only child of U.S. service members, she grew up all over, including Germany, New York, California and Atlanta, where she discovered the Boys & Girls Club. The Club was like an extended family for Ciara, with welcoming staff members who built strong bonds with all the kids. By age 14, Ciara was a talented singer and dancer. At 16, she signed her first record contract and, at age 19, released her debut album “Goodies,” which sold 5 million copies. Over her 15-year career, she has sold over 23 million records and 22 million singles. Ciara enjoys visiting Clubs to share her journey with members to let them know anything is possible.

The Honorable Jerry Demings
Boys & Girls Clubs of Central Florida
At the Carver Shores Boys Club, the close-knit Clubhouse provided Jerry Demings and his twin brother, Terry, a safe, steady space with mentors, structure, plenty of activities, and opportunities to meet new people and make new friends. Jerry’s Club experience also allowed him to develop leadership skills that provided the foundation for future success. After graduating Florida State University, Jerry embarked on a career in public service. He has since served as police chief of Orlando, sheriff for Orange County was elected Mayor of Orange Count in 2018, overseeing more than 8,000 employees and a $4.9 billion budget. He was the first African American to hold each one of those positions.

Frank Layden
Flatbush Boys Club in Brooklyn, New York
Frank Layden was born in 1932 in Brooklyn, New York. From early on, Frank loved basketball and was known as one of Brooklyn’s best young players by the time he reached high school. His local Club invited Frank to join their basketball team. Playing for the Club provided Frank with tremendous exposure and led to Niagara University awarding him a basketball scholarship. After a post-college army stint, Frank became a high school teacher and basketball coach. He ultimately coached 10 years in high school, 10 years in college and 13 years in the NBA and WNBA. In 1984, he was named NBA Coach of the Year and NBA Executive of the Year.

Ricardo Lockette
Boys & Girls Club of Albany, Georgia
The Club had it all for Ricardo Lockette. It is where he learned to swim, make art, use computers and show he was more than an athlete. Befriending Club kids of diverse ethnicities and backgrounds broadened Ricardo’s horizons and made it clear it was okay to be different. After graduating from high school, Ricardo played football at Fort Valley State University. In 2011, he signed with the NFL’s Seattle Seahawks as an undrafted free agent. As a standout special teams player and wide receiver, Ricardo became a fan favorite and a Super Bowl champ. Ricardo is now a player advisor for the Harvard Football Players Health Study, a research program that aims to make the game safer and address the well-being and health of former NFL players.

Titus O'Neil
Boys & Girls Clubs of Palm Beach County, Florida
WWE Global Ambassador Titus O’Neil, aka Thaddeus Bullard, attended Delray Beach Boys & Girls Club at the age of 8 as a safe place to go after school. When he couldn’t afford to sign up for a local youth football league, a Club counselor paid his registration fee. He excelled on the gridiron, earning a scholarship to the University of Florida, where he graduated with a bachelor’s degree in sociology and a master’s degree in administrative education. After a stint in the NFL, O’Neil pursued a career in sports entertainment, and eventually signed with WWE where he has become WWE Tag Team Champion, the first-ever 24/7 Champion and was recently inducted into the WWE Hall of Fame as the Warrior Award recipient, an award given to an individual who exhibits unwavering strength and perseverance and who lives life with the courage and compassion that embodies the indomitable spirit of The Ultimate Warrior.  He is known for his humanitarian work outside the ring as much as his work inside WWE and created the Bullard Family Foundation to provide children and families in need with programs and resources to help build character, develop relationships, and strengthen the communities around them.  In addition to the Boys & Girls Clubs, O’Neil also supports The Special Olympics and Pop Warner Football.

Alex Rodriguez
Boys & Girls Clubs of Miami-Dade
Before Alex Rodriguez became a baseball star, he learned to play the game at the Hank Kline Boys & Girls Club in Miami. Alex was 9 when met unit director and baseball coach Eddie Rodriguez. Though not related, Eddie was like a father to Alex. By high school, Alex was a brilliant baseball player who led his team to the state championship. He stayed a Club member until 1993, when the Seattle Mariners made him the #1 pick in the Major League Baseball draft. Alex went on to be one of the most famous players in baseball history. Over a 22-year career, he was named AL MVP three times, hit nearly 700 home runs and became a world champion. He is now a television baseball analyst for Fox Sports and ESPN, and a board member for Boys & Girls Clubs of Miami-Dade and also for Boys & Girls Clubs of America.

For more information on Boys & Girls Clubs Alumni & Friends or to join the community go to www.bgca.org/alumni.